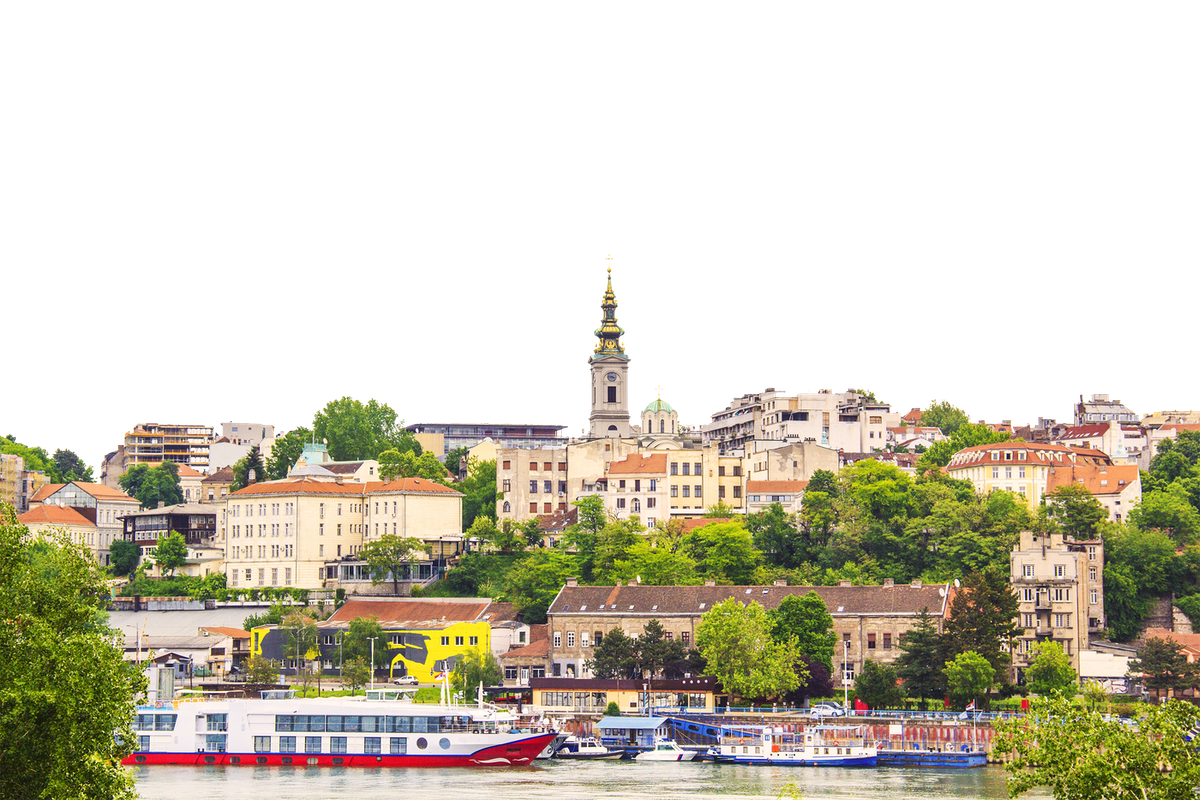 Most resilient in:
46Civic and academic space
Most vulnerable in:
66Political landscape

Serbia's significant challenges lie in the four of five dimensions analyzed in the report. A paramount issue concerns political competition, with the governing Serbian Progressive Party (SNS) ruling since 2012. The parliament has lacked a legitimate opposition since the 2020 election boycott. This development has endangered the country’s democratic plurality. But the dynamic also engenders repercussions on foreign policy, with the government’s pro-Kremlin and pro-Beijing orientation going uncontested.

The government’s anti-democratic tendencies are mirrored in public attitudes. Compared to others in the region, Serbian society is particularly sympathetic towards Russia and China, antagonistic to NATO, and ambivalent about the EU. The public administration’s numerous flaws, including pervasive corruption, state capture, and an information space flooded by propaganda and disinformation, further impede the development of a more democratic and resilient society. Civil society and academia, nonetheless, provide a degree of resilience with academic freedom and freedom of assembly widely respected.

Most resilient in:
46Civic and academic space
Most vulnerable in:
66Political landscape

Due to geopolitical and historical circumstances, the Serbian public is the most receptive to pro-Kremlin narratives.

This is reflected in extremely positive views on Russia and China, strong reservations towards the Euro-Atlantic community, especially NATO, and widespread beliefs in conspiracy theories.

From the Serbian perspective, Russia plays the role of a big Slavic brother who has always protected Serbs – be it during the Ottoman conquest, the First World War, or in the ongoing issue of Kosovo independence. These long-lasting ties are reflected in numbers: 82% perceive Russia as the traditional Slavic brother, while another 59% consider it the most important strategic partner. In other words, Serbia is the country with strongest pro-Russian attitudes from our list.

The NATO bombing of Yugoslavia in 1999 still strongly resonates among the population, with 84% of Serbs opposing integration into the Alliance. The stop-and-go developments of EU integration are also taking a toll, with only 52% willing to join the bloc.

China is viewed positively - 59% consider China to be Serbia’s most important strategic partner and 84% do not consider China a threat for their country.

Religion is the first thing (that connects Serbia with Russia). That’s what connects us, that’s most important. Then history. It’s like there’s something in our genes that makes us love each other.

With the democratic opposition boycotting the 2020 parliamentary elections, the very essence of democracy in Serbia is in jeopardy.

Political power in Serbia is concentrated around the right-wing catch-all Serbian Progressive Party (SNS), which holds most of the executive power as well as the presidency.

EU membership remains an official goal of the government, but the ruling party’s rhetoric is somewhat unenthusiastic – SNS fails to employ pro-EU narratives or promote its values.

This is a great day for our country! The arrival of Chinese experts is extremely important. Many thanks to President Xi Jinping, many thanks to the people of the Republic of China! They’ve proved to be friends when we are fighting for our lives. The Chinese have shown not only friendship and love for our people - they have also shown solidarity with the Serbian people.

As for NATO, the ruling party focuses on a “military neutrality”: while Serbia cooperates with the Alliance within the Partnership for Peace program and participates on NATO military exercises, it also takes part in military drills with Russia.

Backed by popular demand, the governing parties have adopted a pro-Russian stance. With some rare exceptions, this is universal across Serbian politics. Topics like the Kremlin’s disinformation campaigns or aggressive foreign policy are generally avoided; instead, Serbia has entered into a range of strategic agreements with Russia1.

Cooperation with China is approved by the majority of political actors and enshrined in many of the country’s strategic documents which name it as a key partner2.

1 Free Trade Agreements or cooperation in the education, energy, and military sectors.

2 Serbia openly refuses to align itself with the EU’s CFSP declarations and measures on China. President Vučić, for example, sent an open letter to Chinese President Xi Jinping supporting the implementation of the new National Security Law in Hong Kong.

Clientelism, nepotism and corruption are pervasive across public administration.

Serbian public administration suffers from state capture, with checks and balances almost non-existent and state services geared to serve those in power. Corruption is endemic, while institutions tasked with its eradication - including the judiciary and police - are perceived as the most corrupt. Despite the clear indications of possible corruption of state officials, the public prosecutor’s office largely fails to act3. If the authorities do decide to arrest government or party officials, this is primarily done in the context of an internal power struggle.

The electoral system is vulnerable to both external and internal influence, a poor state of affairs that necessitated a European Parliament delegation to step in and negotiate better electoral conditions. Several OSCE/ODIHR reports have detailed the system’s many shortcomings4.

The integrity of state institutions and public administration is threatened; but not as a product of direct Russian or Chinese interference, but rather as a product of the ruling elite’s domination.

Resilience to hybrid threats and foreign malign activities is minimal under such dire circumstances, and the transparency of security documents is lacking (only two security documents are publicly available). Furthermore, such documents propose the need for increased cooperation with the Russian-led CSTO (Collective Security Treaty Organization, intergovernmental military alliance in Eurasia consisting of selected post-Soviet states), highlighting not only a radically different understanding of security by Serbian authorities versus EU/NATO member states, but also differing strategic interests.

4 According to the OSCE, these include a lack of clarity on candidate registration rules, insufficient measures against the misuse of administrative resources for campaigning, and inadequate regulation and oversight of campaign finance, deficiencies and loopholes in dispute resolution, absence of sanctions for some violations, and the lack of provisions on election observation.

With only limited presence of independent media and mainstream outlets promoting pro-Russian narratives, the Serbian information landscape is significantly impacted by disinformation and propaganda.

Serbia’s 90th rank in the World Press Freedom Index reflects the severe shortcomings of its information landscape. These include the state control of media space through direct ownership or other models5, the cumulation of media outlets in the hands of pro-government actors, and attacks on the handful of independent media operating in Serbia, including physical assaults.

Under the slogan “Sputnik Tells the Untold,” (Sputnik Srbija), the Moscow-launched news portal and radio program reaches large Serbian-speaking audiences in Bosnia and Herzegovina, Montenegro, Croatia and Kosovo. Two media outlets with direct Russian ownership are operating in Serbia – Sputnik News and Russia Beyond. The former is rather important, as its content reflects official Kremlin positions and is offered for free to other Serbian outlets.

The major disseminators of pro-Kremlin content in Serbia are outlets considered close to the current ruling elite including the tabloids Informer, Kurir, Srpski Telegraf and Alo!6, as well as the TV stations Pink TV and Happy TV. Their media reporting about Russia is sensationalist and uncritically promotes the Kremlin’s interests.

Pro-Kremlin narratives have been widely present on social media, as confirmed by expert surveys: 24 out of 29 agree that pro-Kremlin actors succeed in shaping the opinions and debate on social media.

Chinese influence on the information landscape has been limited, with President Vučić himself being the most vocal in spreading pro-Beijing narratives.

5 Such as public tenders for media projects, public procurement of media services and direct advertising contracts, which are being distributed arbitrarily.

6 While some owners of these media, like Željko Mitrović and Dragan Vučićević, have apparent links with the ruling elite, for others there is only speculation supported by their unequivocal pro-government rhetoric and direct financial support via state aid.

The demonization of civil society actors as “national traitors and foreign henchmen” originating during Slobodan Milosevic’s rule continues to persevere.

Pro-democratic and environment-focused NGOs face several challenges in Serbia. Far from being limited to campaigns labelling them as “a threat to state security” or “agents of foreign intelligence service”, they also translate into harassment and persecution, including state-led financial investigations with no publicly available results.

There is also a range of pro-Kremlin and pro-Beijing organizations, like the Russian Balkan Center, the Belgrade Center for Eurasian Studies, and the Center for Cooperation with Countries of Asia. As an interviewed expert declared, such organizations’ influence is limited “because the public discourse is already suffocated with pro-Kremlin information, hence there is no need to invest in promotion.” Thus, they are mostly engaged in countering the actions of pro-democratic CSOs.

As for academia, relative freedom is overshadowed by corruption scandals, including cases of fraudulent diplomas for high-ranking political figures (the current Minister of Finance), and privately-owned universities that award academic titles based on plagiarism to, for example, the Minister of Interior and the ex-President.

Chinese influence is less clear in both the media and academia, and goes almost unnoticed under the radar. But given that China will soon open the biggest regional cultural center in Belgrade, we should expect some changes and more pronounced attempts to exercise soft power.