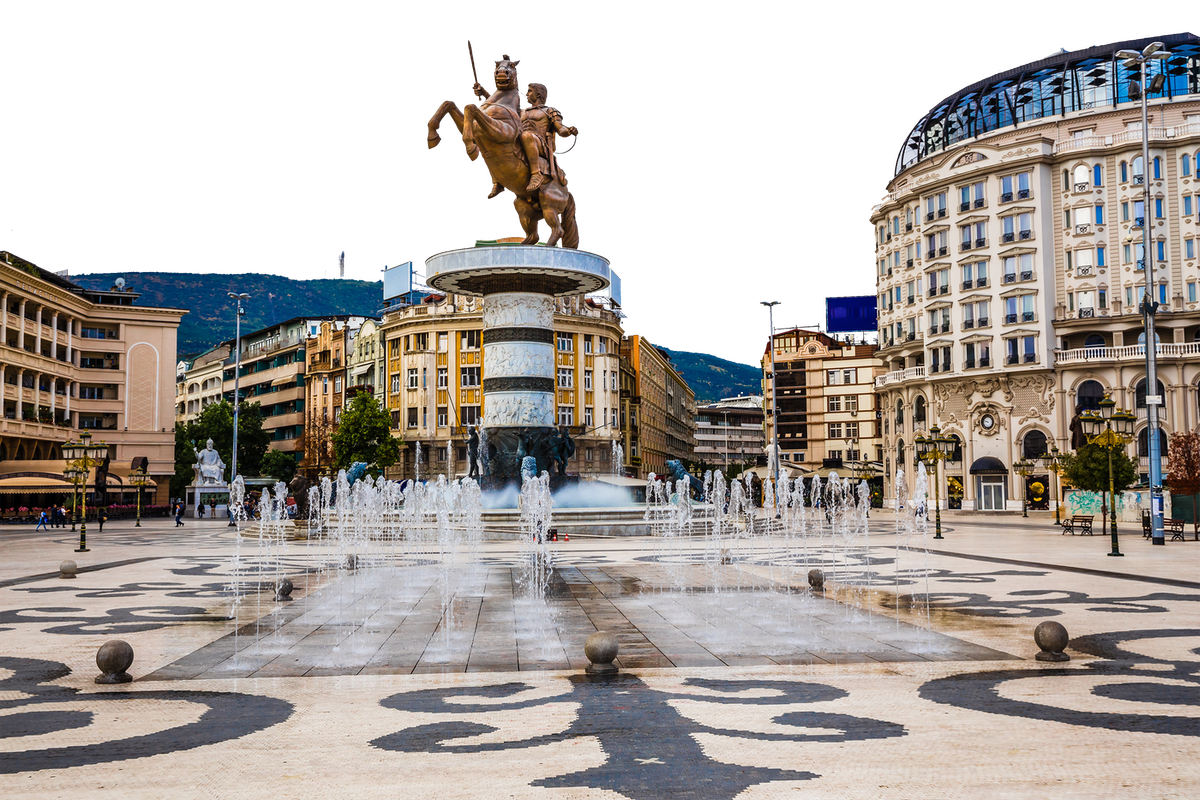 Most resilient in:
25Political landscape
Most vulnerable in:
49Public attitudes

North Macedonia can be classified as the most resilient of the Western Balkan countries examined by the Index. Its society, however, finds itself polarized into antagonistic political camps and remains vulnerable. While a majority of the population still supports the drawn-out EU accession process underway since 2005, views sympathetic to authoritarian rule and the Kremlin and Beijing play a significant role too.

These attitudes are reinforced through an information space largely susceptible to foreign influence through both covert and overt media ownership and certain programs and individuals promoting the Kremlin’s interests. The media landscape further suffers from a lack of diversity with the information environment affected by disinformation and manipulation campaigns.

Most resilient in:
25Political landscape
Most vulnerable in:
49Public attitudes

North Macedonia’s enthusiastic support for EU and NATO membership may be dampened by the drawn-out EU accession process.

46% of Macedonians, the highest number among the countries surveyed, would prefer their country to belong to the West. In line with this attitude, 78% support their country joining the EU, while 72% support NATO membership.

On the other hand, pro-Russian sentiment is considerable. Only 10% think Russia presents a threat to North Macedonia, and 65% believe Russia is North Macedonia’s Slavic brother. These numbers are somewhat lower among the Albanian minority, due to the lack of ethnic and religious ties to Russia. But combined with a high degree of susceptibility to disinformation, this factor can be easily utilized by pro-Kremlin actors in spreading false narratives among the population.

Even though Beijing finances major infrastructure projects in North Macedonia, its citizens are ambivalent towards China - seeing it neither as a threat nor as a partner.

Other critical factors such as political polarization, identity issues, ethnic and religious rifts, and dissatisfaction with democracy are also evident: only 60% of Macedonians believe that democracy is good for their country, and 41% wouldn’t mind having a strong leader who does not have to bother with parliament and elections.

There is no outside force that can destroy us. We are destroying ourselves.”

The political landscape is torn between strong Euro-Atlantic orientation and a profitable relationship with China.

Two parties have had the largest impact on North Macedonian politics since the country’s independence: the social democratic SDSM and the nationalist VMRO-DPMNE. Smaller parties tend to align with bigger political groupings, but generally fail to amass executive power.

Concluding decades-long talks with Greece on the contentious issue of the country’s name change (from the Former Yugoslav Republic of Macedonia), the Prespa Agreement was expected to finally open the door to the bloc. But once it became apparent that the name change alone is not enough to join the EU, even pro-EU politicians struggled to hide their disappointment. However, the leaders’ pro-European orientation is still present through their decision-making process.

The country’s pro-NATO position is clear, and criticism of the organization is mostly seen as contrary to the national interest.

The current government took resolute steps to curb the Kremlin’s influence in the country. This included the decision not to procure the Sputnik V vaccine, and the expulsion of Russian diplomats in light of the Skripal case, followed by two more expulsions in 2021.

As for China, the main driver for cooperation has been the Belt and Road initiative, a soft power instrument solidified through multiple memoranda of understanding between the two governments. Below-market level infrastructure loans have also been a source of concern.

Our fight for a European future was a key factor in the historic agreements with Greece and Bulgaria. We are a European success story - an authentic model for a functional multi-ethnic democracy. A sort of small Europe - living the European motto “United in Diversity” every day.

North Macedonian public administration has several shortcomings, including limited progress on key reforms and a high level of politicization.

To address the issues, the government has pursued public administration reform in line with EU recommendations. Whilst the success of such efforts has proven rather limited, the judicial reform strategy has been a positive outlier.

Corruption has been endemic, with the country scoring 111th on the Corruption Perception Index. Known corruption scandals point to high political circles, including to former prime minister Gruevski and other government officials. The Special Prosecution Office responsible for investigating some such cases itself became involved in a corruption affair in 2019.

Situational awareness towards foreign interference is still being developed. The National Defense Strategy is the only strategic document that clearly recognizes the activities of foreign intelligence services as one of the most serious threats for the country. In a positive step, the government has adopted the Action Plan for Countering Disinformation and has been increasingly concentrating on cyber threats.

Yet resilience remains a challenge, both in protection against cyber threats and electoral integrity. This is evidenced by the example of a cyber-attack that targeted the National Election Committee’s website on election day in 2020.

VMRO-DPMNE, as the largest opposition party, nominates the President of the National Election Commission. That this party had been previously accused of cooperation with and funding from Russian structures raises serious doubts about this important body’s integrity and independence from foreign influence.

Though still in the lower ranks of the World Press Freedom Index, media freedom has been steadily improving since 2016.

Several factors have contributed to this progress, including the adoption of the Register of professional online media and media-related charters aimed at protecting the country’s journalists, cuts in state media advertising, and the professionalization of the public broadcaster.

During the previous government, cases of mass surveillance against journalists had been reported, and it remains commonplace for senior government officials to threaten and insult journalists. Protests against such threats, however, initiated a public discussion about ending officials’ impunity and protecting the media.

The quantity of private outlets trumps their quality in North Macedonia, with many being tied to either political or business interests that in turn influence editorial content. Disinformation and malign narratives tend to flourish online1, with many portals registered offshore – thus avoiding legal repercussions for possible misconduct.

That portals [such as offNET] are oriented toward young people indicates that this is a well-thought-out strategy, leading me to identify this [Russian] influence as malign.

The European Parliament has also raised concerns about the narratives shared in the country's foreign-owned media, particularly by a group of outlets controlled by Hungarian investors close to Viktor Orbán's administration.

Besides ethnic and religious divisions, the political polarization of North Macedonian society is a source of concern.

Societal tensions following the political crisis of 2015-2017 peaked with “Bloody Thursday”, when hundreds of protesters (organized by the VMRO-DPMNE party) stormed the parliament building. Tensions were further amplified by anti-migration social movements such as “Awakening” and demonstrations against the Prespa Agreement. This included the “Boycott” initiative, which, according to an interviewed expert, had actors connected to Russia promoting the Federation as a viable alternative to NATO during demonstrations.

23 of 28 experts see the Kremlin’s influence on North Macedonian civil society as either limited or non-existent.The Russian impact is also evident on the formal level. Its embassy has overseen the establishment of roughly 30 Macedonia-Russian “friendship associations”, with more than 5,000 members officially supporting Russia’s engagement in the country. Russia’s soft-power strategy has increased Moscow’s cultural influence in Macedonia through these associations, in particular the Russian Cultural Center in Skopje.

On the other hand, China has not shown much interest in the Macedonian civil sector, and likely prefers communicating with government officials rather than the NGO sector or private businesses.

Compared to the other two Western Balkan countries covered, the country scores well in the Academic Freedom Index. There are some cases of cooperation between Macedonian and Russian academic institutions, with the International Slavic University being a case in point. Chinese influence in the academic sphere is exercised through a Confucius Institute in Skopje.